The image above is a bible page from the Whitelaw family bible. The first page of the bible says “Catholics of the United Kingdom — England, Ireland and Scotland.” The inscription in the front says “To Tom & Hannah from their mother Elizabeth, Xmas 1895.

On the births page it lists the following information (corresponds with photo above):

In a different handwriting on the bottom it states:

My mystery is, was he indeed a Whitelaw by birth?

I first got information from a pedigree chart that my mother filled out on her family. She listed her grandfather’s place of birth as Neath, Wales. That led me on my search.

I first found the family in the IGI for the LDS Church for christenings at the St. Mary’s Parish Church in Briton Ferry, Glamorgan County, Wales, as follows:

Thomas David Whitelaw is my great grandfather, so I had found my family!

So I started gathering documents.

Knowing that there likely were no birth certificates for my great-great grandfather William Thomas Whitelaw, I then found his marriage certificate, which LISTED HIS FATHER as William Whitelaw, occupation Confectioner.

Now assuming that William Thomas Whitelaw was the son of William Whitelaw and his wife Catherine Davies, I then started searching for the parents of William Whitelaw (senior). My search led me to Scotland. I found a will for John Whitelaw which listed William as a son. The will follows here:

Will of John Whitelaw

I, John Whitelaw, Pawnbroker in Airdrie being resolved to settle the succesion(?)  to my property on the event of my death and for other goods and sufficients(?) considerations do hereby Give Grant Assign and make over to and in favor of John Whitelaw, Weaver, Airdire, David Martin, Labourer, Airdrie, _, Gilbert Lang, Writer, Glasgow and to the acceptions(?) and survisors or survivor of them this major part of them alive and accepting at the time being always a quorum as trustees for the purposes after mentioned.  All and Sundry goods, year bonds, bills, accounts, bank bills or cheques, household furniture, wearing apparel, stock in trade and whole other personal and moveable property of every description of denomination presently pertaining or belonging to me or due addable(?) to me or which shall belong and be owing to me at the time of my death dispensing with the generality of these present and declaring the same to be as valid effectual as if every article of my said moveable means and estate were herein specially described and conveyed But declaring that these presents are granted by me for the ends uses purposes and under the burdens conditions of reservations after written First that the said Trustees or Trustee shall immediately after my decease enter into the popepion(?)  and management of my said whole moveable means of estate wind up the business presently carried on by me and sell or dispose by public or private sale thereof so far as  (___) uplife receive and discharge the prices and proceeds of the same and execute to their (__) chasers binding my heirs and successors in such warrandice as they the said Trustees shall think (___) all which shall be equally valid and effectual as if done by myself hereby declaring that the Purchasers of or Debtors to my said subjects shall have no concern or right to interfere with the application of the prices or debts payable by them but shall be completely inconered by the receipts of the said Trustees or quorum or survivors of them that the said Trustees or Trustee shall have power to deposit in their own names in any sure Bank at interest or to and out upon sufficient security any part of the paid Trust funds that may be necessary for answering the purposes of the Trust and_______ and discharge ______ and, secure the same or any part thereof from time to time as they shall judge, proper and also that they shall have full plower to sue for uplift and discharge, the said debts and subjects before conveyed to them compowered transact and agree the____ to adjust and settle all disputes matters and claims respecting the trust subject by arbitration or otherwise and generally every other thing thereanent(?)  to do which I could have done in my own lifetime.  Second my said Trustees shall from the proceeds of my said subjects satisfy and pay all my just and lawful debts and obligations and that upon such evidence as they shall judge satisfactory and also the whole expenses of ___outing the Trust.  Third that the said Trustees or Trustee shall from the said Trust funds satisfy and pay the following sums of money and donations which are hereby begated and bequeathed by me to the persons after montioned respectively namly to John Whitelaw my grandson, son of the said John Whitelaw Ten pounds sterling.  To John Martin my Grandson son of the said David Martin Ten pounds sterling.  To John Gunn my Grandson, son of David Gunn, Baker, Merthyr Tydvil Ten pounds sterling. To John Whitelaw, my grandson, son of William Whitelaw, baker at Aberavon, Wales Ten pounds sterling all which sums to bear witness interest from the time of my death and to be payable twelve months thereafter.  To David Martin, my grandson, son of the said David Martin the sum of eighty pounds sterling payable on his attaining the age of twenty one years said sum to be invested by my said Trustees or Trustee twelve months after my death for behalf of the said David Martin and in the event of his death previous to attaining said age of twenty one I direct one half of said sum of eighty pounds and interest accumulated thereon as aforesaid to be paid to his brother John Martin my Grandson if in life and the other half to be divided equally among the children of the marriage between the said David Martin and Jean Whitelaw my Daughter to the said John Whitelaw my son the whole standing Household furniture. I may die ____ of which I hereby assign and make over to him accordingly.  Fourth to divide the free residue and revision of my said whole means and estate equally among my children the said John Whitelaw, Weaver, Airdrie.  Jean Whitelaw spouse of the said David Martin, Labourer, Airdrie, and said William Whitelaw, Baker, Aberavon, Wales, Janet Whitelaw, spouse of the said David Gunn, Baker, Merthyl Trydvil and James Whitelaw. 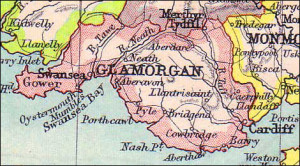 In 2004 my husband and I traveled to Wales and spent three nights in Neath. We took the train from London and we were met and were given a personal tour by a man whose family had married into my Whitelaw family, and who I had met on the Internet on a Glamorgan Rootsweb (genealogy) mailing list. The central part of Neath had not changed much in the 150 years since my Whitelaw family had lived there. The Castle Hotel where we stayed was there in the mid 1800s, so I could envision my Whitelaws walking those same streets 150 years earlier. 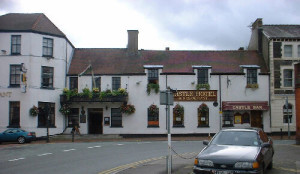 I visited Wind St., Water St., and High St. where the Whitelaws lived, plus where William Thomas lived and worked in Briton Ferry, just across the river from Neath. 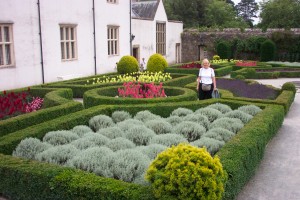 The Mystery of William Thomas Whitelaw

My first inkling that William may not be part of the Whitelaw family came when I did not find William Thomas Whitelaw listed as a grandson of John Whitelaw in John Whitelaw’s 1855 will.

I kept searching and found a marriage document for Catherine Davies, who was born in 1812 in Neath. She married Charles VEALE on 17 Jan 1829 in the Parish Church in Neath. They had a daughter named Elizabeth Veale in 1829.

Catherine Davies VEALE then married William Whitelaw on 3 Feb 1839. She was listed as a widow, so Charles Veale had already died, but I have found no death record. 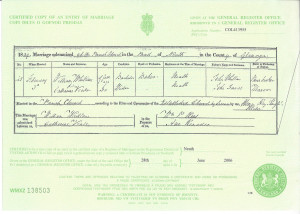 However, I then found the census of 1841 with William, age 9. He was living in a household with  James Whitelaw and Janet Gunn & David Gunn and Alexander Gunn, who could be his aunts & uncles. It said he was born in the same county (of Glamorgan). 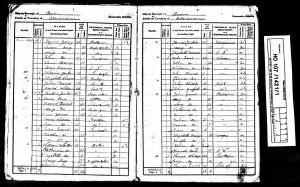 Then in the 1851 census William is listed as a NEPHEW and Confectioner’s Assistant in the household of William and Catherine, not as their or her son. 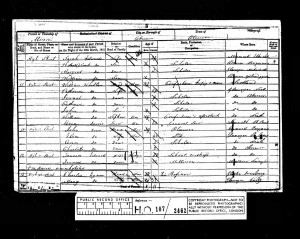 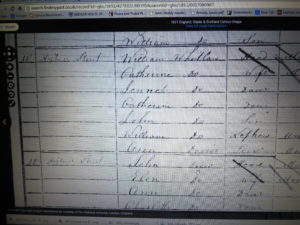 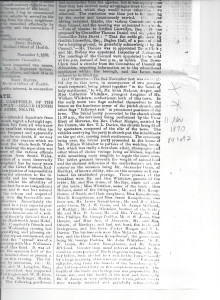 I found NO record that William was born to Charles VEALE and wife Catherine DAVIES. However, birth records were not required in Wales until 1837. And I have found no document for any William Veale. So did William Whitelaw adopt William Thomas Veale?  I have found no document that would prove that. It has been suggested by other genealogists that I met in Wales that they could have just given the surname Whitelaw to William Thomas without a formal adoption. Could William have been the son of another Whitelaw in the family? Perhaps one whose mother had died? William Thomas Whitelaw does list his mother as Catherine Davies and his father as William Whitelaw on his marriage document (below). Another clue is that William was the only Whitelaw in that family to leave Wales and sail to America. I may never know the truth about my great-great grandfather William Thomas Whitelaw. 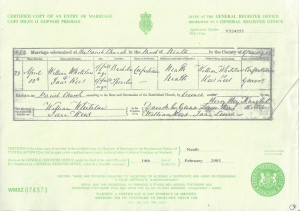 William Whitelaw and Jane Rees were married at the St. Thomas Parish Church (photo below). Built as the garrison church for the Norman Neath Castle, St. Thomas’ Church has been in continuous use as a place of worship for over 700 years. St. Thomas is the only fully functioning medieval building remaining in the town and it stands as a unique historical record of Neath life down the centuries. 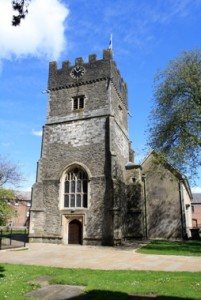 William Thomas Whitelaw became a Baker in Briton Ferry, Glamorgan, Wales, like others in the family. They were confectioners. 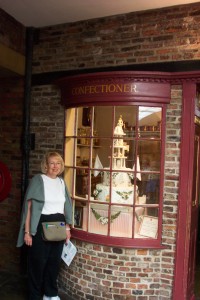 I am standing in front of a replica of a Confectioner’s Shop in Wales.

While living in Briton Ferry, William Thomas Whitelaw is listed as a Ships Chandler and Grocer in 1861. He also was the Postmaster. The Post Office was opened in his Bakery shop in Briton Ferry. It was the FIRST post office in the area.

There were over 40 references in the Cambrian Newspaper for William Whitelaw. It was easy to track my Whitelaws in Glamorgan because they were the ONLY Whitelaw family there!

I do not find William and his family in the 1871 Wales census. Since they arrived in America in January 1872, they just could have missed being counted for the 1871 census.

William Thomas Whitelaw and his wife Jane and their children sailed for America on the ship S.S. Colorado and arrived in New York on 25 Jan. 1872. 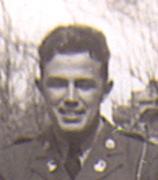 And so it would seem that our WHITELAW family are actually VEALE descendants. I have unsuccessfully tried to document the family of Charles VEALE in England. I believe he was born in London, England, and there are several VEALE family members that COULD be the parents of Charles. So for now, I’m content with focusing on our WHITELAW family in Wales and St. Louis.

I will continue to add documents and photos to this website.

If you have a connection to this family, please contact me at [email protected]

7 thoughts on “WHITELAW Family of Wales and St. Louis Missouri” 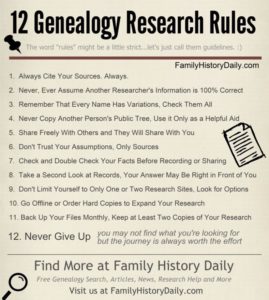