This Hardcastle Family Bible came into my possession because my mother-in-law married John “Chick” Hardcastle in 1966 several years after Nellie’s husband John Powell passed away. Chick had no children by his first marriage and so the bible was passed down to me, Elaine Hatfield Powell. I am putting this information online so that others researching this Hardcastle family can have this important family information.

The bible is in poor to fair condition. It has a lot of foxing on the pages. It does not have a musty smell. I have kept the bible in an archival box for over 20 years.

The bible has a brown leather cover with some minimal scrollwork. There is no title or copyright page because the first two pages of the bible have been removed. Therefore, there is no date on the bible itself. However, the first page of the bible says “TO THE READER” and it says that the bible is an American version of the King James Bible, and the publisher states “he has made the following impression from the Oxford edition of 1784. So if I had to guess, I’d say the bible dates from the late 1700s to the early 1800s.

I have made additions in between [ and ] to clarify certain things in the bible.

Died at 4 o’clock a.m. 27th inst. at the residence of her son-in-law James Hardcastle, in the 76th year of her age.

Mrs. Hardcastle was born in Bourbon Co., Ky. on Dec. 6th, 1806. She was the daughter of Andrew Hamilton and Elizabeth Kincaid Hamilton. Her father was born June 12th, 1776, and her mother July 19th, 1776. In the pleasantries of the family circle her mother was accustomed to boast that she was free-born, but her husband was by birth a British subject.

Mr. and Mrs. Hamilton removed, with their family, to this state and county, and settled near Greenfield, in 1827 — the year in which the first mile of railroad in this country was built. In 1829, John Hardcastle and Miss Margaret Hamilton were married and began life together, on their farm at Walnut Grove, where they ever lived and where they now lie buried. The husband was buried seven years before the wife. In this home also the father and mother died. She was the last of her father’s family. Here were born to them ten children, six of whom survive them. Two sons reside in Texas; one daughter in Kansas; the youngest son Robert retains the old home, while two sisters, Mrs. William Waller, and Mrs. James M. Russell also reside in this county. Twenty-five grandchildren and a very large circle of relatives are greatly bereaved in Mrs. Hardcastle’s death.

When 17 years old, in Paris, Ky., she publicly confessed the Lord Jesus Christ as her saviour, and in her last conversation with her pastor, she said she had never for a moment regretted it, but more and more her confidence was strengthened. “He is my only hope,” she said, with strong emphasis. She dreaded the thought of living to be burdensome to her children. She did not dread death. She expressed the feeling of many a widowed heart: “I have been very lonely since my husband died.”

She was the last of the original members of the Walnut Grove Presbyterian Church, and as [the next several lines have been ripped off]  Living more than fifty year upon one farm, and not given to going about much, her good deeds have been confined to the few miles about her home, but within that circle who has won so many hearts? The whole county is in sorrow at the thought that we shall see her face no more. All felt that the text of the funeral discourse was appropriate in her case: Rev. XIV — Blessed are the dead which die in the Lord from henceforth; Yea, saith the Spirit that they may rest from their labors; and their works do follow them.

Inside the front cover there is an obituary of Mrs. J. M. Russell

Mrs. Lucy Hardcastle, wife of James M. Russell, died at their home near Smithboro, Bond County, last Friday, July 22, [1894] at 2 p.m. She had been ill and a great sufferer for along time. The body was brought here last Saturday, and taken out to Walnut Grove [in Greene County, Illinois]. The funeral service was conducted at the church there Sunday at 10:30 a.m., by the pastor, Rev. Reuben L. McWherter. A large company of relatives and friends were present and followed the body to the place of interment, the family burying ground west of Robt. Hardcastle’s home.

Lucy Hardcastle was born on the farm west of Walnut Grove [Greene County, Illinois], now the home of her brother Robt. Hardcastle. She was married to James M. Russell February 20, 1868. Seven children were born to them, all still living to mourn the loss, for a little while, of their best and truest earthly friend, their mother. Mrs. Russell professed conversion and united with the Walnut Grove Presbyterian church during the pastorate of Re. John N. Beall. Her faith was strong and her hope bright. In her last illness she expressed an assurance of a home with her Saviour. She selected part if not all the hymns sung at the funeral, and also chose the text, John 16:16 — “A little while and ye shall not see me; and again, a little while and ye shall me, because I go to the Father.” For the past year she had been a great sufferer, yet there was no murmuring. During this while, as in all her life, she exhibited great patience and cheerfulness.

Written in ink: Margaret Hardcastle, Great Granddaughter of John Hardcastle. [I am guessing that means that Margaret owned the bible.]

In the middle of the bible, there are four pages marked “FAMILY RECORD” and those four pages follow: 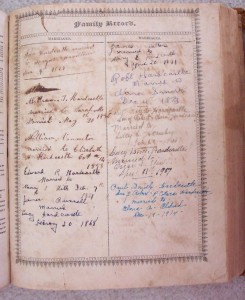 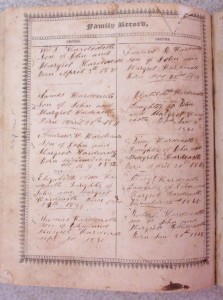 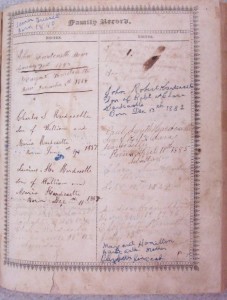 Below are all the descendants that I have for James Robert Hardcastle: